On 15 July, 2022, HC Capital’s community had the opportunity to exchange with IVAN MARTINEZ @MartidoreHL [CEO OF HEROES LINAGE] to join the AMA to provide useful information about Heroes Lineage.

This AMA is organized by HC Capital – The leading cryptocurrency community in Vietnam where investors and traders can receive the latest news and signals as well as discuss and share investment experience in the cryptocurrency space.

Today Ama will start  now with Part 1: Some questions from HC for Heroes Lineage.

Q1. Can you please introduce yourself and a quick introduction to the community. What is Heroes Lineage  all about?

IVAN MARTINEZ: Yes, My name is Iván Martinez and I’m the CEO of Heroes Lineage. I have been working in the videogames industry for more than 10 years now, in the F2P market.

We have released several titles like Steel Wars Royale among others (you can check it on Google Play). And we wanted to bring that experience to the blockchain gaming space.

I really believe that the Blockchain is the future for videogames.

As for Heroes Lineage, it’s a NFT RPG game that wants to capture the essence of the MMORPG genre and with a strong tactic combat system

We have been working on it for almost one year, and we are SUPER close to our Gen 1 heroes presale, the 20th of July

so only 5 days left!

IVAN MARTINEZ: So I’m a hardcore MMORPG gamer. I have been playing games like WoW, Lineage 2, Archeage etc. for years

During those years I discovered some problems that can be solved thanks to Blockchain technology, like items ownership and trading.

If you wanted to sell or buy an item, you had to go to an “ilegal” forum to do the transaction.

it was super risky, and you could be easily scammed. Also if the game detected that, they could ban your account.

All those problems can be soved with the blockchain technology and the proper use of the Markerplaces.

In heroes lineage you can progress with your characters through missions(PvE) and PvP, you can join a guild inside the game to do group content (world bosses and castle sieges), and there is a big map for you to explore.

Which basically is the essence of any MMORPG.

Jannie: Q3. Can you elaborate more on your differences with other projects?

IVAN MARTINEZ: We have been working on this project for almost 1 year now. We have a playable product that can be downloaded ( https://play.google.com/apps/testing/com.globalonlinegaming.heroeslineage.game.fun ) and we also have a fully working multiplayuer 1vs1 combat system with matchmaking and leaderboards.

And we have done all of this without asking for a single $ to our community.

This is the bigger difference with other projects, where they just have a beautiful website and an idea, but nothing else. Nevertheless they start to ask for monay at that point.

We want to be honest and transparent. First we want to show our product and the let the community decide if they like it or not.

Also, we are focusing on creating a FUN product. It needs to be fun or otherwise the project will not be sustainable in the long term.

So we are puting a lot of effort to the game design and game balance aspect of the game. We have developed 3 different combat systems and picked the one we liked the most.

We want to create something beautiful, engaging, full of adventures and fun to play with your friends. Those are the bigger differences with other projects. 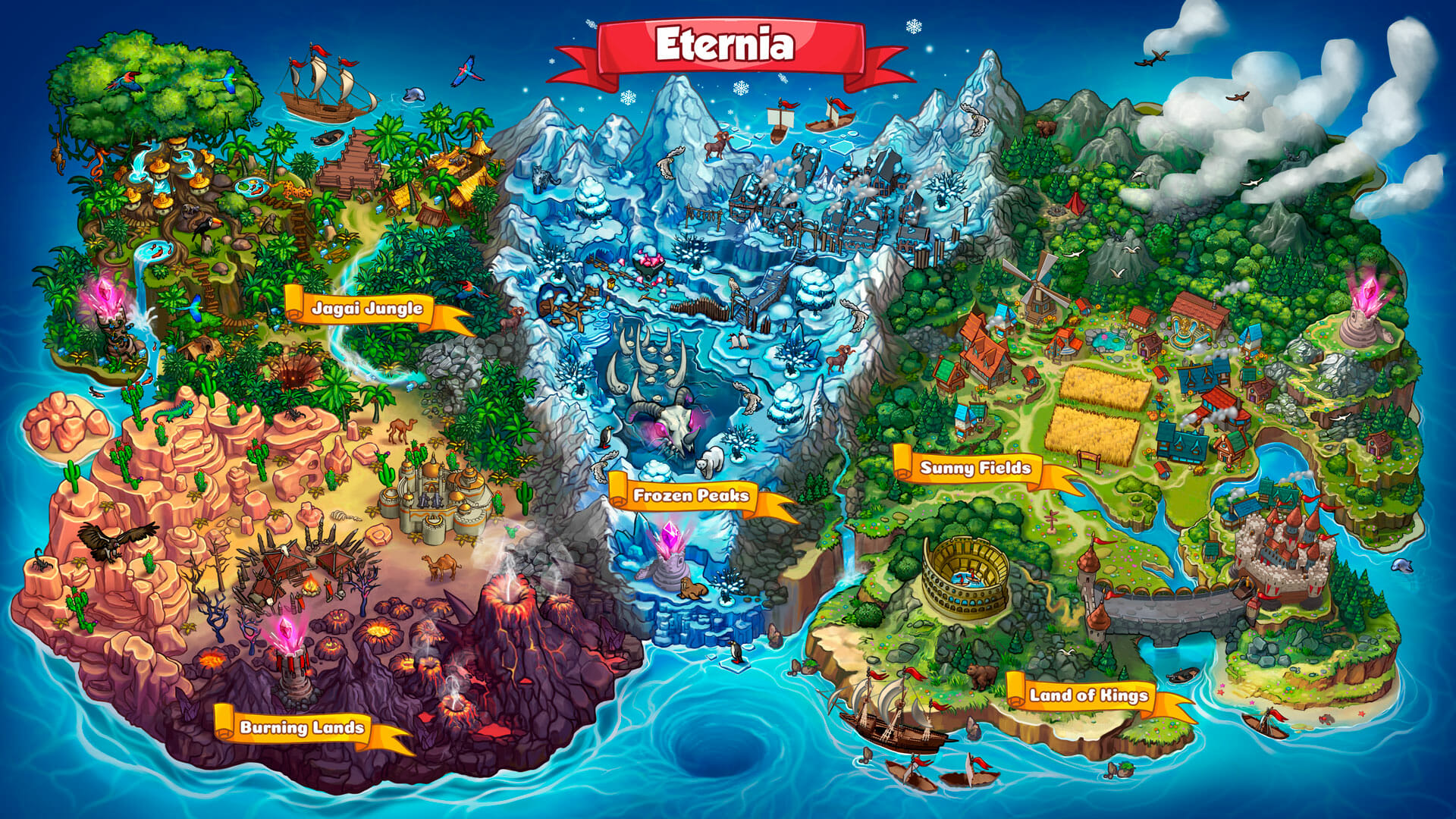 This is our map by the way, so people can take a look at the scope of the project.

Jannie: Q4. Can the team share their Roadmap and the results that the team has achieved so far?

This is a big milestone completed for us. We are about to release (in 2 or 3 weeks) the Competitive Alpha, which is a version with the Multiplayer 1v1 combat system already working. We have a price pool of $10k for the top ranked player among the competitive seasons of this Competitive Alpha version.

Only owners of Gen 1 heroes will be able to get prices from the reward pool. That is one of the many benefits that Gen 1 Heroes have.

So we have a fully working product that can be already played and enjoyed by our community. We will be running this competitive alpha version for some months, adding new features and new heroes.

Meanwhile we are developing the official 1.0 public version, that will have all the progress system, missions, etc.

The official 1.0 version will come Q1 2023. We want to release a solid and tested product, so we need some time to polish everything and make sure it’s secure.

Jannie: Q5. Can you share your upcoming Heroes Lineage plan? What is the project’s strategy to attract new users and long-term investors to Heroes Lineage ?

IVAN MARTINEZ: So, the next big thing for Heroes Lineage is the Competitive Alpha, again this is going to be a fully playable version that you will be able to enjoy with your Gen 1 Heroes NFT’s.

You will also get acces to a big reward pool of $10k for the top ranked players in the leader.

As for the strategy to attract new investors to the project. As I mention, I think that the most important thing is giving trust to the community. I think we have already done that by developing a product without asking for money.

And also create a fun and quality product. We have put a lot of effort in the quality of the producion (graphics, music, animations, gameplay, game balance, strategy etc.) and that will help the project to reach the next phases.

If you have a good product, and you have trust, you can be sure that the community will keep growing with our marketing campaigns.

Oh, and very important, we have a very unique type of NFT’s for the investors who love the project, they want to participate, but they don’t have time to play. They are the infrasutrctures, take a look at our white apper to learn more about it!

Jannie: Is your project available for the global people or It’s limited for some area? If it’s globally available are you guies planing to introduce it globally?

IVAN MARTINEZ: It is globally accesible as long as you have an internet connection and a device to play it.

Web 3.0 is all about bringing communities alltogether.

We want to welcome everyone in the game as long as they are here to have fun, respect the rules, and respect other players.

Jannie: Does Heroes Lineage team have a training and guidance system for newcomers to cryptocurrency? How do you attract and reach them?

IVAN MARTINEZ: As I mentioned at the begining, we have more than 10 years in the Free 2 Play mobile games industry.

We know how to target gamers, how to create effective marketing campaings. And how to keep the community engaged through LiveOps, events, and such things.

We are working on breaking the “technological barrier” that separate us from the rest of the world.

How to create a Metamask, how to transfer funds etc. are some common questions to non-blockchain users.

We are always giving information and teaching newcomers how can they join us! that is super important. We are also creating some cool interactive tutorials tal will help a lot.

If you have any doubts, feel free yo join our social medial channels, we are here to help!

Jannie: How would you deal with the situation if there were not enough people interested in the project despite excellent marketing?

IVAN MARTINEZ: That would be a difficult situation, but we have been there before.

What you need to do in this case is analyze what is wrong with your product. Is it too difficult? Is it too easy? The graphics are not appealing?

TO get that information you need to have a strong Data and Analytics system like the one we internally have.

Information is power, and we have a lot of information about how the users use our product.

In that case, we would analyze the data, see where we can improve, and take action!

Jannie: Does Heroes Lineage game only support PC device. Many games don’t support mobiles, and that reduces the attraction of many players around the world. Will it be compatible with Android devices and also iOS. Will it be released first in desktop version or mobile version ?

IVAN MARTINEZ: Heroes Lineage can be played on PC but also in mobile devices like Android.

We will soon have an iOS version.

Mobile and cross platform is the future. The game needs to work in any device in order to reach a broader and global audience.

So don’t worry, no matter what your device is, you will be able to play it!!

Jannie: What do I need to start playing Heroes Lineage? When exactly will we be able to play Heroes Lineage, will I have to invest large sums to play? Do you plan to offer an area where we can experience Heroes Lineage for free?

IVAN MARTINEZ: So, to actively play Heroes Lineage, you will need a minimum of 4 heroes. We are about to release for the first time a Gen 1 Heroes presale.

There will be options for freemium players, but they won’t have the advantages of the playters who own heroes.

We want to welcome everyone to the game. But of course give benefits to the investors that trust in the project.

As a freemium player you will be able to enjoy the game but with many limitations.

IVAN MARTINEZ: How many different hero classes do we have so far?

IVAN MARTINEZ: At what level can Heroes select a Subclass?

IVAN MARTINEZ: How many members can join a level 1 guild?

IVAN MARTINEZ: How many players can play together to defeat a World Boss? The strongest type of boss.

IVAN MARTINEZ: How many players can participate in a Castle Siege, including attackers and defenders?

Jannie: It was a great AMA session.

Amazing Q&A! Thank you @MartidoreHL for joining us 👏 and good luck with Heroes Lineage.

Hope this AMA Recap will let you understand more about Heroes Lineage. Thank you for following AMA Recap and for your companion also HC Capital!